written by George Gelagin for the 1999 75th Anniversary.

Sawtell School opened in rental accommodation in August 1924 under the name of Bonnie Bonville. This was a provisional school under the care of Thomas Moran. Bonnie Bonville was raised to the status of Public School in 1927 where it came under the Headmastership of Oscar Salter.

(Listen here to an interview with Mr Col Irvine, an early resident of the area, talking about the development of the Sawtell township in the 1920's.

The interview was conducted by Kerri Moss in 2003 as part of the Coffs Harbour City Council's 'Voice of Time' Oral History Project.) 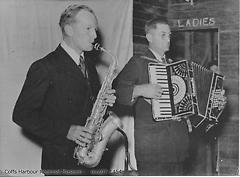 While Mr Salter was in charge the school was moved to its location (1928) and re-named Sawtell School after Ossie (Osmund Campbell) Sawtell who donated the land. It was in this period that the first assistant at Sawtell was appointed (Beth Davidson).

Between April 1945 and May 1957 a further 4 acres were acquired by Government Grant, resumption and purchase.

Until November 1955 the Kindergarten children were housed in a small building previously used by the R.A.A.F. The timber kindergarten room was occupied on 7th November 1955.

Bonnie Bonville started with 22 pupils but 2 years later that number had increased to 36 under the paternal eye of Oscar Salter. Oscar Salter predicted a great future for Sawtell even when it was a tiny fishing village. Mr Salter's first assistant, Beth Davidson became a Headmistress of some note. The nearest High School in those days was at Grafton! Six pupils qualified for entry to Grafton High School in 1927. They were Norma Bower, Jessie Cockbain, Albert Hobbs, James Hunter, Doris Johnson and Herbert Sawtell.

School enrolments slowly increased during the depression and early war years. By 1943 the enrolment was 96 pupils but then it experienced a post war boom and the number of students had swelled to 203 (!) by 1950 (the post war baby boomers). Through the 50's and sixties the school population stabilised and with the opening of Mary Help of Christians offering alternative education it took 18 years to grow to 225 pupils, but only 7 to grow to 340 pupils (1975). It may be significant to note that the Principal of the day Mr Frank Wilsmore wrote in the newsletter that the current issue of the time was skate-board riding! He wrote that "it is a shame to see it's use barred (skate boarding) because of a few irresponsible persons".

With Toormina Primary opening in 1979, Sawtell's accommodation problems were eased and by 1980 pupils from Sawtell could attend their own district High School (Toormina High). By 1991 numbers had again ballooned to 340 and 64 pupils transferred to the new school at Bayldon and Sawtell's numbers had dropped to 254. It is interesting that with no major housing development in the offing the enrolments at Sawtell are again nudging the 320's mark and a demountable classroom was brought in in 1998.

Return to top of page

We would like to pay our respects and acknowledge the traditional custodians of the land and also pay respect to Elders both past and present.

Copyright for this website is owned by the State of New South Wales through the Department of Education. For more information go to https://www.dec.nsw.gov.au/footer/copyright.